Gay marriage has been a big story lately. According to people of the Christian faith gay marriage goes against the way of God and the Bible. There are some reasons why Christians should embrace same sex relationships and they may even be permitted in the Bible.

Adam and Eve were the first humans and many think that it is natural for a man and a woman to go together. There are other things that modern people use that are not natural. This includes prosthetic limbs and even wheelchairs. Many people have one companion in our life and according to God a companion does not have to be of the opposite sex. People are not meant to live along according to Genesis 2:18 and God encourages people to have a mate. 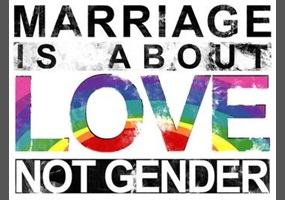 Many people use Genesis 19 1-13 Sodom and Gomorrah’s destruction of the cities is due to intolerance for homosexuality. As it turns out God was frowning upon the sin and the wickedness as well as greed rather then the male relationships.

Looking at the difference between normal and abnormal things even Jesus did something abnormal when he was on Earth. He would speak to Samaritan woman which was an uncommon thing for a Jew to do. Jews did not speak to woman outside of the Jewish religion. This give a prime example that just because something is not common does not mean that it is evil.

Paul speaks about how acting on lust and desire are morally wrong but a loving relationship between two people are okay. God objects to sexual gratification just for the purpose of filling the need for pleasure. If a couple is involved in a loving relationship that just happens to be of members with the same sex then it is okay as love as they are in love.

There are just some things in the Bible that show that it does not condemn homosexuality. The Bible states that a person should have a companion to navigate life and just because something is no common does not mean that it is morally wrong.…